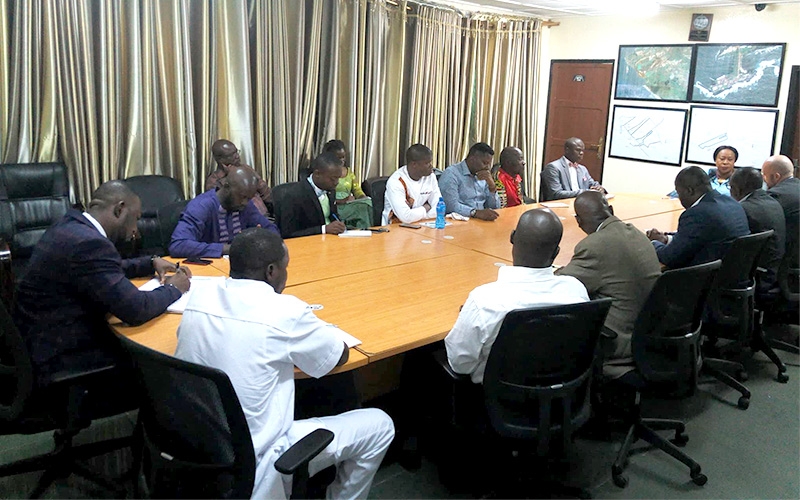 David Skov, Chief Executive Officer and Regional Director of APM Terminals has agreed to send  a team   of " experts " to finalize plans for the official turning  over of the Marine Services back to the NPA.

This follows a meeting with the Port Management team and the APM Terminals visiting CEO to Liberia on Tuesday.

Hon. Celia Cuffy Brown, acting Managing Director, NPA, and reemphasized manage-ment's position about reclaiming the marine services during the meeting and informed the APM Terminals Chief Executive Officer that the Port is resolved on the matter and has officially communicated said decision to the Ministry of Justice and other relevant government ministries and agencies.

Madame Brown averred that the US$7 million being generated annually by APM Ter-minals through marine operations, with the port benefiting only US$4,000 robs the Port of the needed revenue and further undermines government’s agenda to impact the lives of the poor.

Chapter 7.6 (d) of the 2010 concession agreement between the Liberian government and APM Terminals, APM Terminals allowed the Cargo handling Company❨APM Terminals ❩ to operate the Marines Operations of the port for five years only; something that prompted the cur-rent Management of the Port to demand the turnover of the Marine operations after unsuccessful attempts by past management.

APM Terminals has operated the marine services for seven years, two extra beyond the five years in the agreement and has generated over US$38 million while the Liberian government through the port has only received US$28,000 out of this amount in royalty.

As part of the demand to reclaim the marine operations, the NPA Management has requested APM Terminals to remit the money they accrued in those two years into the Liberian govern-ment’s account.

The NPA through a former communication has also request APM Terminals to remit all funds accursed from marine operations to its covers as of  April 2018 until final turn over of the marine operations.

Mr. Skov, along with his Commercial Manager Noah Sherriff and George Adyei, Man-aging Director have said APM Terminals is prepared to comply with the terms of the concession and work with the Port Management.

Also, in furtherance with revenue recovery plans by the current Port Management to enhance growth, improve infrastructure development and human capacity, the NPA has advanced efforts to regain operations of the weigh bridge at the Freeport of Monrovia.