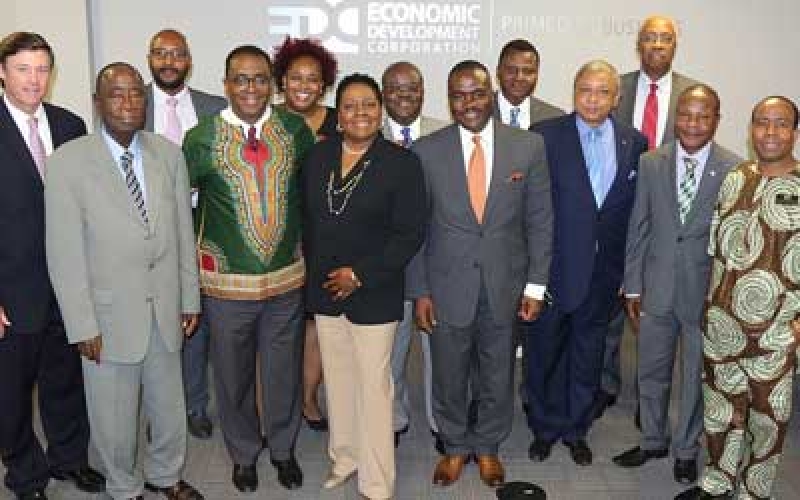 embassy staff and Maryland Liberian community leaders who are looking to share investment opportunities with Prince George's County, specifically their vast port system. EDC President and CEO Jim Coleman and his executive team, along with EDC Board Member Eric Henderson, and local business moguls shared their insight regarding U.S. investment and trade in Africa. Through passionate dialogue, it became apparent that a partnership between Prince George's County and the Port Authority of Liberia will have very fruitful returns for both sides.

"I have a personal interest in helping to make Liberia's economy thrive," said Coleman.  "When I learned of my family's direct connection to the very foundation of Liberia, I knew that there would be no better time for us to leverage our relationships and resources to find investment opportunities that will create jobs and rebuild a flourishing business environment in this port community. Today's discussion has helped us cross a bridge to bring my 'cousins' together with the resources we have in Prince George's County and in the United States."

Members of the delegation included Gabriel Williams from the Embassy of Liberia, Gerald F.B. Cooper, Planning Chair with Marylanders for Progress (Liberia) Inc., the Honorable John G. Bestman, Chair of the Board of the Liberia National Port Authority, David Williams, Managing Director of the National Port Authority of Liberia and Mr. Barnabas Kasor, Executive Director for Ports and Harbor.  Mr. Williams provided a detailed overview of the port system in Liberia and its value proposition for redevelopment.

"We are delighted to have been a part of today's briefing as we discussed how we can create a linkage between the Prince George's County Economic Development Corporation and the Port Authority of Liberia," said Williams.  "This is an exciting time for Liberia as a result of the renaissance that has taken place in the country as a whole, but in particular the ports. We had a very interactive discussion about the port systems and how we can go about getting capital for some of the projects.  We hope to establish a committee to have further discussions about collaborations that we intend to pursue.  We are very glad to be here and express our gratitude to Mr. Jim Coleman and the entire EDC Team."

Members of the delegation were extremely interested in how the County and the U.S. can utilize its vast resources to bring foreign investors and better opportunities with key business owners to redevelop and diversify the ports of Liberia.  During their lively discussion, EDC Board member Eric Henderson suggested that the group formally adopt a memorandum of understanding that specifically identifies the most profitable investment opportunities in Liberia.  With this document in hand, the EDC will be able to share Liberia's value proposition in tandem with local investment opportunities.

"I'm excited to be here to promote the interest of the Sister/State agreement with Liberia," said Morris Koffa, Co-Chair of the Maryland Liberia Sister State Committee. "I think the discussion we had today was quite interesting and something that we can build on for the future. We hope to move forward with this program and shape other relationships with the help of the EDC. Together we can form a greater community for Prince George's County and Liberia."

The Sister State agreement was established in 2007 between Liberia and the State of Maryland to further enhance cultural and historic understanding and cooperation, and to promote international trade between the USA and Liberia. The MOU that will be created as a result of today's discussions will complement the Sister State agreement by stimulating the port economy and enhancing the quality of Liberia's imports.

The EDC, County of Baltimore and the Baltimore port leadership will host the National Port Authority of Liberia delegation tomorrow for further talks aimed at cementing the discussions already begun.