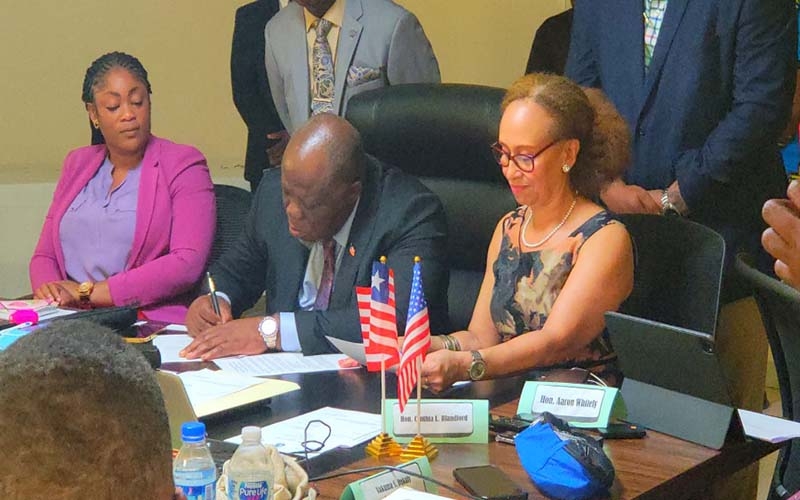 Monrovia – The National Port Authority (NPA) has signed a memorandum of understanding with the Georgia Ports Authority (GPA) to renew commitments between the two sisterly cities for the advancement and promotion of trade.

The signing of the MOU was preceded by a round table discussion that touched on a host of other things that seek toward the advancement and the promotion of trade between the two sisterly port authorities.

Speaking at the event, the Managing Director of the National Port Authority Bill Twehway was pleased to have a delegate from the Georgia Ports Authority sign what he terms a historical document.

The MOU he says is a non-legally binding one. This, Mr. Twehway says, is to strengthen the National Port Authority and that of the Georgia Ports Authority.

The Managing Director of the National Port Authority listed four ports in the country but highlighted that only the Freeport of Monrovia which is run by APM Terminal is up to international standard.

According to the Managing Director of the National Port Authority, Liberia has the water and the land but only lacks the necessary investor to manage the remaining three ports.

“We also have an inland port; we have brought the land and pay about 75 percent of the residents of that particular area. We got 175 acres of land and we intend to create an inland port. We are looking for investors who have the interest to come and help us create an inland port that will serve the people of Ivory Coast, Guinea, Mali, and Liberia,” he said.

Mr. Twehway added: “So, signing an MOU with Georgia that will be looking at training, marketing, information sharing, infrastructure improvement, we can now say this is one of the best achievements we had had in this port. We are happy to sign this MOU with you and we pray that you will look to us and we will grow like the Port of Georgia. The National Port Authority along with our four ports –even if we achieve 50 percent of what you have achieved, we will be very grateful. Our area can be used as a hub for West Africa.”

Cynthia L. Blandford is the President and CEO of Global Strategies for Good. She is also the Honorary Consul of the State of Georgia.

She is optimistic that the signing of the MOU will strengthen trade between Liberia and the United States, especially the States of Georgia.

According to Madam Blandford, her team has been able to review the list of imports and exports between the two countries. This, madam Blandford boasts that her city textile, chicken, and other items to Liberia.

“We are here today to see how we can strengthen trade. Many of our containers are coming back empty out of Liberia to the United States, particularly to Georgia; we want to do better, to strengthen trade. We want to work with some of our small, and medium size businesses, the Liberia Businesses Association, Chambers of Commerce, and others to make sure that we meet all of the necessary requirements to strengthen trade and to get those containers filled from here (Liberia) to Georgia,” Madam Blandford said.

Speaking virtually from the State of Georgia, the Director of Business Development and International Marketing of Georgia Port Authority John Petrino says he was excited to be a part of what he referred to as a historical event.

He disclosed that the collaboration that was signed in 2010 will provide opportunities for Africa and Liberia in particular.

“We have enjoyed a strong relationship with the Liberian Government for the past 12 years and we look forward to that,” Mr. Petrino said.

Adding up, the Commissioner of Chatham County of the State of Georgia Aaron Whitley said he was proud to witness the signing of the MOU between the two countries.